Arguably the most successful propaganda campaign of contemporary society, the lasting effects of the Red Scare can still be felt in America and throughout the world today. One of the most infamous actors in spreading anti-Socialist propaganda remains relatively unknown in the West is Aleksandr Solzhenitsyn. Most well known for the books and articles he published about millions of people who allegedly lost their lives and freedom in the Soviet Union, Solzhenitsyn became a celebrity in the capitalist sphere of the world during the late 60s thanks to his book, Gulag Archipelago. But to understand the motives of Solzhenitsyn requires an understanding of his life in the Soviet Union.

Born shortly after the Russian Revolution in the year 1918, Solzhenitsyn's mother was the daughter of a wealthy landowner and his father an officer in the Imperial Army. In World War II, he served in the Red Army and, after witnessing the horrors of war, questioned whether the Soviet's were any better than the Nazi's. This experience ultimately led him and his friend, Nikolai Vitkevich, to strongly criticize Stalin and call for a new organization to replace the Soviet government:

"These two young officers, after days of discussion, astonishingly drew up a program for change, entitled 'Resolution No. 1.' They argued that the Soviet regime stifled economic development, literature, culture, and everyday life; a new organization was needed to fight to put things right."

In 1945, Solzhenitsyn was tried and convicted to 8 years of internment in a labor camp for "anti-Soviet propaganda under Article 58 of the Soviet criminal code, paragraph 10 and of founding a hostile organization under paragraph 11."

During his time in the Gulags, Solzhenitsyn began to produce far more right-wing, fascist works; his writings went so far as to argue that the Nazi's only wrongdoing was to not allow the self-determination of a Russian fascist state:

"The Germans, in their shallow stupidity and self-importance, allowed them only to die for the German Reich, but denied them the right to plan an independent destiny for Russia."

Solzhenitsyn believed that the Soviets should have reached a compromise with Hitler rather than going to war with Nazi Germany, blaming Stalin for the war rather than Germany's facist state. Solzhenitsyn made little attempt to hide his pro-fascist activities, believing communism to be the greater threat of the two ideologies.

While imprisoned, Solzhenitsyn was found to have a cancerous growth and was provided treatment by the Soviets that ultimately resulted in the cancer going into remission. In spite of this, Solzhenitsyn's anti-Soviet views were only strengthened; he began to increasingly identify as Eastern Orthodox Christian, developing the foundation of his right-wing philosophy for the remainder of his life, which fueled his desire of an Eastern Orthodox state under Tsarist rule. He continued to write anti-Soviet propaganda, committing the works to memory so that his fascistic ideological leanings would go undetected.

Following Stalin's death, the Soviet government experienced an internal power struggle that saw Nikita Khruschchev rise to power following his condemnation of Stalin's purges and repression, Khruschchev freed Solzhenitsyn from exile and exonerated him. In 1962, Khruschchev allowed the publication of an edited version of Solzhenitsyn's One Day in the Life of Ivan Denisovich, about the life of a prisoner. Khruschchev defended the publication of this work, despite its criticism of Stalin and the Soviets, arguing that "There's a Stalinist in each of you; there's even a Stalinist in me. We must root out this evil." Many scholars consider Khruschchev's embrace of Solzhenitsyn as a move to further consolidate power by rejecting Stalin's socialist ideology and consolidating public support behind his revisionist agenda.

In 1970 Solzhenitsyn won the Nobel Prize in Literature for his book, Gulag Archipelago. His books began to be published in massive numbers in capitalist countries, making Solzhenitsyn one of imperialist's most valuable instruments in combating socialism throughout the world. Solzhenitsyn's texts on labor camps formed the core of capitalist, anti-Socialist propaganda.The capitalist media presented the materials as authentic, legitimizing the 'horrors' of Socialism in the minds of billions throughout the world. Solzhenitysyn's works became the basis of claims that Socialism was responsible for the death and imprisonment of tens of millions.

In 1974, Solzhenitsyn was arrested in the Soviet Union and deported to West Germany, where he renounced his Soviet citizenship and went into exile in Switzerland. At that time he was regarded by the capitalist press as the biggest fighter for 'freedom' and 'democracy.' Naturally, the US invited Solzhenitsyn to take residence there so that he could continue his work. Solzhenitsyn arrived in the US and began to work at the Hoover Institution, a conservative think tank. Due to Solzhenitsyn's critical role in creating, legitimizing, and disseminating anti-Socialist propaganda, the US worked to hide  his fascist sympathies from the public.

In the US, Solzhenitsyn became the figurehead of the anti-Socialist political movement. He was the leading speaker at the FAL-IOC union congress in 1975, and later that year was invited to give a lecture in the US Senate on the world situation.

His lectures sought violent provocation and agitation, providing arguments and propaganda in favor of the most reactionary positions. Among other things, Solzhenitsyn called for a re-invasion of Vietnam after its victory over the US. When leftist army officials took over Portugal in the popular revolution of 1974, Solzhenitsyn began to create propaganda in favor of US military intervention in Portugal which, according to him, would join the Warsaw Covenant if the US did not intervene. At multiple speaking engagements , Solzhenitsyn lamented the liberation of Portugal's African colonies.

Following Franco's death in 1975, Spain's fascist regime began to lose control of the political situation and began to attract the attention of global public opinion. There were strikes and demonstrations to demand democracy and freedom, which forced Franco's heir, King Juan Carlos, to introduce some liberal measures as appeasement measures. At this crucial moment in Spanish political history, Solzhenitsyn appeared in Madrid and gave an interview to the show Directísimo during prime time. Solzhenitsyn, who had been informed of the questions before the interview, took the opportunity to make all sorts of reactionary statements. His intention was not to support the alleged 'liberalization' measures of the regime; on the contrary, Solzhenitsyn was opposed to democratic reform. In his television interview, he declared that 110 million Russians had died as a result of Socialism, and compared "the slavery to which the Soviet people have been subjected to the freedom enjoyed in Spain." Solzhenitsyn also accused the 'progressive circles' of naivete, for daring to believe Franco and the current regime were dictatorships. He ended the interview by equating Spanish anti-fascists with terrorists, stating, "world public opinion was concerned about the luck of Spanish terrorists." 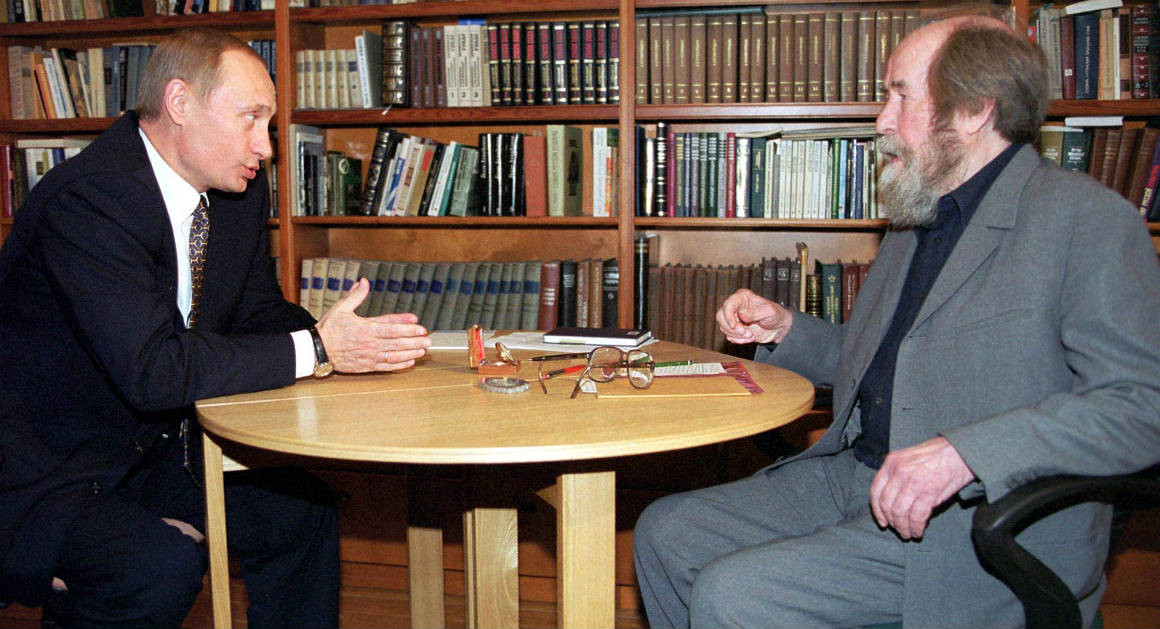 Putin Meets with his Guru, Solzhenitsyn

From his claims that millions were executed in the Soviet Union to his allegations that tens of thousands of American soldiers were enslaved in North Vietnam, Solzhenitsyn's motivations were always driven by his religious right-wing desire to rid the world of Communism. Solzhenitsyn presented the US and the capitalist West with an invaluable tool to undermine the legitimacy of Socialist states and prevent the spread of Socialism in their own nations and throughout the world. During his speeches, Solzhenitsyn accused journalists who dared call for peace between the US and USSR of treason.

Solzhenitsyn also utilized fearmongering to support increasing funding of the US Military. According to an article by Mario Sousa, published in the Swedish Comunist Party's newspaper Proletären in April 1998, Solzhenitsyn claimed that the Soviets were:

"more powerful in 'tanks and aeroplanes, by five to seven times, than the US' as well as in atomic weapons which 'in short' he alleged  were 'two, three or even five times' more powerful in the Soviet Union than those held by the US."

Solzhenitsyn's religious fervor, modest upbringing as a result of the redistribution of his family land, nationalist ideology (fueling his fascist sympathies), and imprisonment/exile led him to develop intense right-wing beliefs. These beliefs festered within him, leading his works to become propaganda aimed at disseminating lies in order to delegitimize the Soviet state and Socialist ideology. In spite of his fascist sympathies, the US and Western capitalist nations saw Solzhenitsyn as a means to manufacture consent for their war on Socialism. The imperialist West enabled Solzhenitsyn to become a figurative reincarnation of McCarthy, leading the ideological war on Communism in the capitalist spheres of the world.