Tonight's debate was the DNC's most obvious attempt to overrule the popular vote, manufacturing consent against Bernie's campaign. From the pre-debate political commentary, which aimed to skewer Bernie as a 'communist' who will undoubtedly lose to Trump, to the audience supplied by the DNC that raucously applauded the lines of Bloomberg, Biden, and Trump, every second was intended to create the illusion that Bernie is unpopular, can't win, and is out of touch with the American people. Having secured 46.8% of the vote (beating the candidate in second place by 26.6%), Bernie had all of the momentum going into the debate, and it showed in the DNC and CBS's desperate attempts to undermine his political revolution and prop up their preferred candidates.

For the first half of the debate, the moderators allowed the candidates to interrupt and speak over Bernie, interject in response to him (despite not having been mentioned), speak whenever they want in between questions, and make their case without time restrictions. This devolved until the moderators were finally forced to interrupt Pete, asking him to essentially shut up, so that they might move onto the next topic. While the moderators finally reigned in this chaos during the latter half of the debate, the damage had been done. 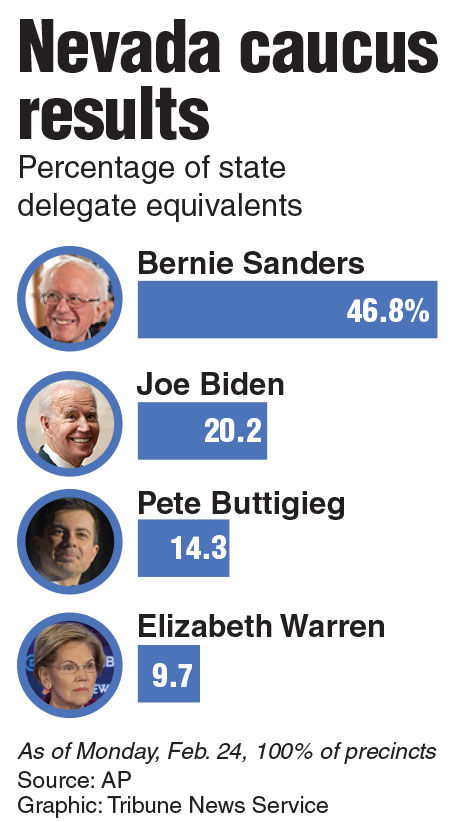 Bernie came into the night as the most likely to secure the nomination, polling a close second in South Carolina and polling as the winner in virtually all of the Super Tuesday primaries. Bernie managed to defend the attacks on him remarkably well given the clear attempts to bias the debate process against him. In acting so desperately to prevent Bernie from winning the nomination, the DNC and CBS made it clear that Bernie is right in arguing that the establishment will do anything in their power to undermine his campaign's path to victory. Ultimately, this only serves as evidence of the corporate greed and corruption inherent to capitalism and neoliberalism that Bernie's movement seeks to address. Why should a voter trust the media and other candidate's criticism of Bernie when they've shown just how far they're willing to go in order to prevent his victory?

Biden was a winner tonight because he didn't have any major gaffes, managed to look civil amongst the chaos early in the debate, and elaborated on his policies and voting record. By talking about the substantive issues of the election and landing a few good shots on Steyer, Biden had a relatively strong performance in comparison to the other candidates on stage.

The DNC's strategy to pack the audience with supporters of the three centrist candidates with the clearest path to prevent Bernie's victory reeked of desperation. It has become clear that the DNC will do everything in their power to overrule the will of the people. In doing so, they have ensured that the DNC as we know it now will not continue to exist. If Bernie succeeds in outright winning the nomination, he will appoint a head of the DNC who will drastically reform how the party operates. If the nomination is stolen from Bernie or he loses as a result of the DNC's attempts to actively destroy his political movement, the DNC has virtually guaranteed that the party will be far too fragmented to unite and defeat Trump.

(Sign up to protest in the event of a brokered convention)

The moderators looked powerless to reign in the candidates (albeit Bernie and Biden). Their blatant and absurd bias in attempting to smear Bernie and undermine his path to victory were a bad look for the network. Their choice in moderators and political analysts providing commentary before and after the debate showed their hand.

After missing the Nevada debate, the candidates made up for it by doubling down on their criticisms of Steyer, attacking him for his profiting from private prisons. While Steyer might have been polling third in South Carolina prior to tonight, it's hard to imagine his campaign doesn't take a hit.

It wasn't a particularly good or bad night for Pete, but that's not good enough when you're polling at around 2% support with black adult voters going into the South Carolina primary. Pete constantly interrupted and spoke over Bernie, leaving a bad taste in the mouths of viewers. While this was hardly unique to Pete, he really came off as the worst perpetrator given he spoke over Bernie for a good 30-45 seconds when Bernie was posed a question and also had to be told several times by the moderators to stop talking so they could move on to another topic. In focusing on attacking Bernie, Pete largely failed to discuss his platform throughout the entirety of the debate. Overall, a relatively poor outing for Pete, which is unlikely to bolster his support going into South Carolina and Super Tuesday.

In many ways, Warren's performance tonight mirrored Pete's. She also took advantage of the lack of moderation in order to steal time on air from the other candidates, which didn't necessarily help her gain any good will with viewers. She focused on drawing distinctions with Bernie by claiming she can get stuff done, but this wasn't necessarily the right strategy given Bernie's supporters are unlikely to waiver in their support for him. Her argument comes down to her being, "the progressive that can lead," but she's failed to garner much support in any of the primaries to date. Additionally, with the audience being so heavily stacked with Bloomberg supporters, there were several times in the debate where she was audibly booed by the crowd over her criticism of Bloomberg. She was undoubtedly right in attacking Bloomberg given his awful record as a politician and human being, but the optics of the attacks didn't work tonight.

Bloomberg and Klobuchar didn't have exceptionally good or bad nights, but neither of them had any singular moment in the debate that might leave a lasting impression on undecided voters. Klobuchar doesn't have any significant support in South Carolina or any of the Super Tuesday states, with the exception of Minnesota, so her argument that she alone can unite midwestern voters really falls flat. Bloomberg fails to appear on the South Carolina ballot, but has decent levels of support in polls across the Super Tuesday states. However, with Bernie currently leading in delegate count and polling first in most Super Tuesday states, Bloomberg failed to get the solid showing he desperately needed to be considered a winner tonight.